A Storage Area Network (SAN) is a specialized, high-speed network that provides block-level network access to storage. SANs are typically composed of hosts, switches, storage elements, and storage devices that are interconnected using a variety of technologies, topologies, and protocols. SANs may also span multiple sites.

A SAN presents storage devices to a host such that the storage appears to be locally attached. This simplified presentation of storage to a host is accomplished through the use of different types of virtualization.

SANs are often used to: 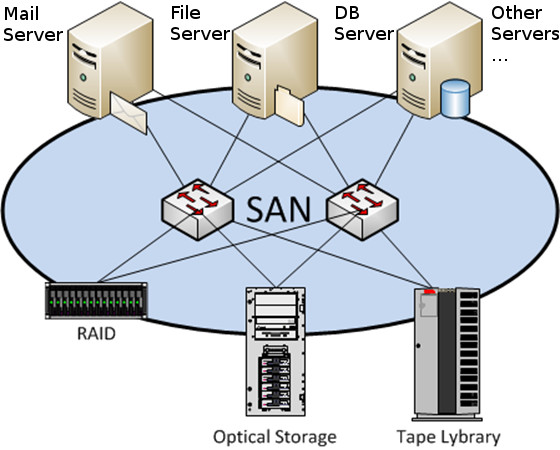 SANs are commonly based on Fibre Channel (FC) technology that utilizes the Fibre Channel Protocol (FCP) for open systems and proprietary variants for mainframes. In addition, the use of Fibre Channel over Ethernet (FCoE) makes it possible to move FC traffic across existing high speed Ethernet infrastructures and converge storage and IP protocols onto a single cable. Other technologies like Internet Small Computing System Interface (iSCSI), commonly used in small and medium sized organizations as a less expensive alternative to FC, and InfiniBand, commonly used in high performance computing environments, can also be used. In addition, it is possible to use gateways to move data between different SAN technologies.

The terms SAN and NAS are sometimes confused with one another because the acronyms are similar. Network-attached storage (NAS) consists of a storage appliance that is plugged directly into a network switch. Although there are exceptions, NAS appliances are often used as file servers, whereas SANs are used for structured data stored in databases.

A SAN is far more complex and costly than NAS. A SAN consists of dedicated cabling -- usually Fibre Channel, but Ethernet can be used in iSCSI or FCoE SANs -- dedicated switches and storage hardware. SANs are highly scalable and enable storage to be exposed as LUNs. 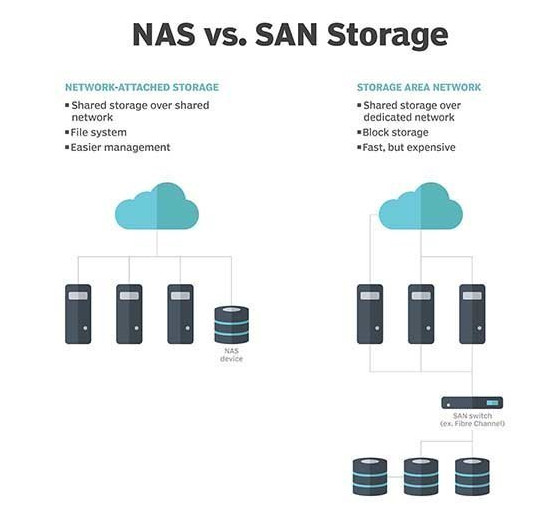